By: Toni Gentz
In: Lifestyle
With: 0 Comments
Spread the love

Akara is a dish made from peeled beans formed into a ball and then deep-fried in dendê (palm oil). It is found in West African and Brazilian cuisines. The dish is traditionally encountered in Brazil’s northeastern state of Bahia, especially in the city of Salvador.

Acarajé serves as both a religious offering to the gods in the Candombléreligion and as street food. The dish was brought by slaves from West Africa, and can be found in various forms in Nigeria, Ghana, Togo, Benin, Mali, Gambia and Sierra Leone.

Acarajé is made with cooked and mashed black eyed peas seasoned with salt and chopped onions molded into the shape of a large scone and deep-fried in palm oil in a wok-like pan in front of the customers.It is served split in half and stuffed with vatapá and caruru– spicy pastes made from shrimp, ground cashews, palm oil and other ingredients. A vegetarian version is typically served with hot peppers and green tomatoes. Acarajé can also come in a second form called abara, where the ingredients are boiled instead of deep fried. 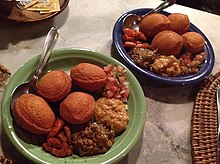 Akara (as it is known in southwest and southeast Nigeria) a recipe taken to Brazil by the slaves from the West African coast. It is called “akara” by the Yoruba people of south-western Nigeria and by the citizens of Sierra Leone, “kosai” by the Hausa people of Nigeria or “koose” in Ghana and is a popular breakfast dish, eaten with millet or corn pudding. In Nigeria, Akara is commonly eaten with bread, Ogi (or Eko), a type of Cornmeal made with fine corn flour.

Akara plays a significant role in the Yoruba culture, as it was specially prepared when a person who has come of Age (70 and Above) dies. It was usually fried in large quantity and distributed across every household close to the deceased. Akara also used to be prepared in large as a sign of victory, when warriors came back victorious from war. The women, especially the wives of the Warriors were to fry Akara and distribute it to the villagers.

In Sierra Leone, Akara is composed of rice flour, mashed banana, baking powder, and sugar. After mixed together, it is dropped in oil by hand, and fried, similar to Puff Puff. It then forms into a ball. It is usually prepared for events like Pulnado (event held due to the birth of a child), a wedding, funeral, or party. No matter how big the occasion, this item is a classic in the Sierra Leonean community.

Acarajé sold on the street in Brazil are variously made with fried beef, mutton, dried shrimp, pigweed, fufu osun sauce, and coconut.Today in Bahia, Brazil, most street vendors who serve acarajé are women, easily recognizable by their all-white cotton dresses and headscarves and caps. The first appeared in Bahia selling acarajé in the 19th century. The city now has more than 500 acarajé vendors. The image of these women, often simply called baianas, frequently appears in artwork from the region of Bahia.Acarajé, however, is available outside of the state of Bahia as well, including the streets of its neighbor state Sergipe, and the markets of Rio de Janeiro.

Note: The shape of the akara is affected by two factors: thickness of the pureed beans and your method of frying. Shallow frying  or watery batter will result in flat akara.

Mom runs off with daughter's husband and has a baby with him after paying for their R280 000 wedding...
Checkout this article - Loving me for my thorns
Why You Shouldn’t Have Sex Immediately After Shaving Your Pubic Hair
Michelle Heaton can't bear to look in the mirror as she's horrified by surgery scars(photos)
These foods can help reduce your high blood pressure
Why Consuming Vaginal Fluids Is Good For You
2018-08-01
Previous Post: 10 Best Places to Visit in Kenya
Next Post: Great Pyramid of Giza,Egypt