By: Sam Longe
In: News
With: 0 Comments
Spread the love

The presentation of an Integrity Award to the Vice President, Yemi Osinbajo has been postponed by the Wole Soyinka Centre for Investigative Journalism (WSCIJ) over protests on the repression of freedom of speech taking Sowore’s issue as a case study.

It was stipulated as part of the 2019 Wole Soyinka Award for Investigative Reporting meant to hold on Monday night December 9 in Lagos that the former attorney general of Lagos state and Vice-President of Nigeria would be presented an award on this day which coincides with the World Anti-Corruption Day.

Several Nigerians have stormed the social media to query the timing of the award which has generated protests while some Nigerians want the centre to cancel the award meant to be given to Osinbajo.

While reacting to the new development, the Executive Director/CEO of the Centre, Motunrayo Alaka posted on the organization’s Twitter page @WSoyinkaCentre at 2:32 am on Monday announced the postponement of the award to Osinbajo.

She said the postponement was in response to the protest against what she called, “the repression of freedom of speech” by the present administration, citing the case of the convener of #RevolutionNow Movement and Sahara Reporters’ Publisher, Omoyele Sowore.

She wrote: “The postponement was decided on, to align with protests against the repression of #FreedomOfSpeech in recent times, especially the incidence between the Department of State Security (DSS) and @YeleSowore, Publisher of @SaharaReporters, on Friday 6 December. 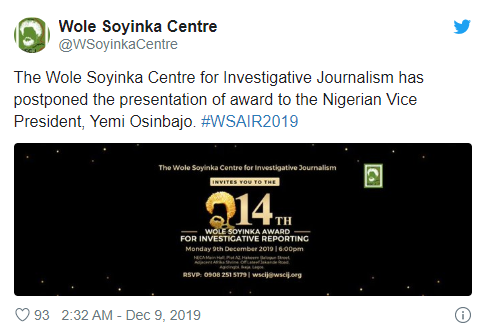 “The Vice President @ProfOsinbajo himself shares this awareness and the inappropriateness of the award at this point.”