Woman Filming Storm Struck By Lightning, But Saved By Her iPhone Cover (Photos)

The shocking moment a mother, was filming storm is ‘struck by lightning’ but survives, all thanks to new mobile case she clipped on that day.

A 42-year-old woman identified as Tracey Kutluol, has been camptured on camera in a video which shows the moment she claims she was struck by lightning as she filmed a storm from the upstairs window of her home, screaming and repeatedly shouting ‘I’ve been hit by lightning’ in the dramatic footage filmed on her mobile.
According to Dailymail UK, Kutluol, escaped without injury, which she credits to a new phone cover she had clipped to her iPhone 7 plus earlier that day.
The video footage opens with a series of dramatic flashes and thunderclaps as Kutluol films from an upatairs window. At one point, a voice can be heard joking ‘I might get electrocuted’. There follows another warning to be careful – which is brushed away with the remark: ‘You like a storm.’ 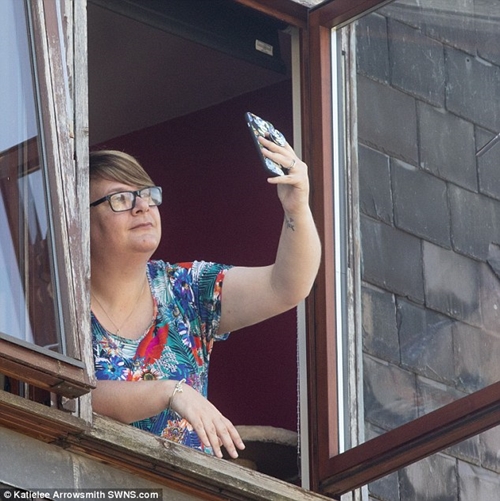 Seconds later there is an enormous flash and massive bang followed by a scream from Tracey as she drops the phone. At least one other person can be heard giving a prolonged scream.
Kutluol can then be heard sobbing over and over: ‘I’ve been hit by lightning’ before the clip cuts out.
She has revealed that she had escaped without injury but was very shocked by her brush with death.
She said: ‘The phone is working fine with not one mark on the case. I had a tingling in my hand and arm for a bit. The phone case I got yesterday morning and it’s got a pop socket attached which is rubber…so we think it’s hit the rubber.’

She believes the new rubber case on her iPhone saved her life
‘I’m still in shock…I had to try keep everyone calm. I had my 10-year-old screaming for the cat…my pal having a panic attack and my 14-year-old daughter thinking the house was going to blow up.
‘I told them all to go down stairs to my bedroom as we live in a 3-level with the living room on the top. Then we went to each room and pulled all the plugs out ‘